During my pregnancy, I never doubted the fact that I was going to breastfeed.  It wasn’t even a question in my mind.  Breastfeeding is natural, normal and was the default option in my mind.  My mum breastfed all of us, my youngest sister in fact until she was 3 years old, and I had never even seen anyone bottle feed.  One of the first gifts my mother gave me when I was 8 weeks pregnant was “The Art of Breastfeeding” by the La Leche League.  It is a lovely book, full of wonderful information about breastfeeding, and it is what planted the seed of homebirth in my mind.  However, despite all the troubleshooting tips and discussion of the difficulties, I still got the overall impression that breastfeeding was going to be all amazing bonding with my child while angels danced around me singing hallelujah.
Pretty much as soon as my baby was put on my chest, she started seeking out the breast, which was amazing to see, that pure natural instinct.  But my first surprise in my breastfeeding journey was that she didn’t know how to latch on – and I didn’t know how to help her.  She didn’t actually end up feeding until hours later as I was about to be discharged from the hospital – the midwife luckily asked me if we had fed yet and as we hadn’t, showed me how to do it.  My second surprise was that teaching her to latch involved holding her head and basically shoving it firmly onto my nipple.  The roughness of it was not what I expected.  For something so “natural”, it wasn’t that intuitive to begin with.
Luckily my baby was a born breastfeeding pro (and not all are!) and we soon got the hang of it.  She had a strong sucking reflex and latched well right from the beginning (not all women are this lucky, some have a great deal of difficulty establishing correct latch).  However, despite her excellent latch, my virgin nipples were soon excruciatingly painful.  Every time she latched on was absolute agony for about a minute and I began to dread every feed – given she was feeding every 1-2 hours, that’s a lot of agony!!  By the end of the first week I had had enough and was honestly ready to give up breastfeeding if a wonderful friend hadn’t come to visit bearing breast shields.  Breast shields are little plastic teat-like things that you put over your nipple while your baby drinks and provides a bit of a barrier to give your nipples time to heal.  These were absolute sanity savers for me, made a huge difference and saved my ability to breastfeed.  After just a few days, I was able to get rid of the shields and breastfeeding never hurt again.
My next surprise, however, was how I felt about breastfeeding.  I had been concerned during pregnancy about how breastfeeding would feel, as my breasts have always been an integral part of my sexuality, and the thought of having a baby suck on them was a little hard to get my head around.  I kind of just assumed, though, that because it is so “natural”, that when the time came, it would be fine.  Turns out, making that shift is really not so easy.  I felt very uncomfortable with breastfeeding for quite a long time.  It did not feel like bonding.  I didn’t like it at all.  I didn’t sit there gazing at my baby full of love – I just felt weird and uncomfortable.  It was just a chore.
My first turning point came when I realised that maybe it was ok for it to just be a chore.  Maybe it didn’t have to be all love hearts and kumbaya – maybe it was just like changing nappies… I don’t love it but I do it because it has to be done to care for my baby.  It is cheaper and more convenient than formula feeding, and maybe that was reason enough.
It wasn’t quite enough though, as I continued to feel very uncomfortable with it.  There is a lot of stigma around bottle feeding these days, with breastfeeding pushed heavily, but at the end of the day, in no other part of life would a woman be stigmatised for saying “no” to a use of her sexual parts that she felt uncomfortable with.  I did a lot of research on the topic of breast versus formula feeding and a lot of soul searching, and decided to try a bottle of formula with her when she was about 3 weeks old.  Just to see how it went.  I knew that if it felt like immediate relief feeding her with a bottle instead of my breasts, then maybe formula feeding would be the right choice for me.  I truly believe that a happy mum equals a happy baby, and that if breastfeeding is impacting negatively on the mother’s mental/emotional health or on her ability to bond with her child, then breast in that case may not be “best”.  The most important thing is that a child is loved and fed by a happy mum. 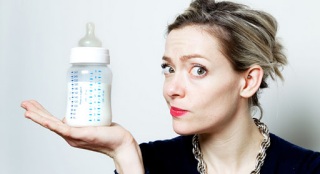 My second and most important turning point in my breastfeeding journey came the day when I decided to try a bottle of formula.  That feeling of relief and having my body back was what I was expecting to feel.  What I actually did feel was completely unexpected.  Having never had a bottle before, I wasn’t sure how she would take it.  I followed a recommendation to use Nuk bottles (which are great by the way!), and she latched on after only two tries and immediately started gulping the milk hungrily!  Did I sigh in relief?  Did I think “oh thank god, this feels so much better”?  No – I felt a deep ache within me, pulled her off the bottle after only two gulps and put her on my boob.  I felt jealous of the bottle!  Everything in me was crying “no, you’re supposed to get that from me!”  *I* was her source of nourishment,  *I* was the one who induced those sleepy milk smiles, *my* milk was supposed to be what she wanted – that was something special for just her and me.  I had never enjoyed feeding her as much I did during that feed.

Which is not to say it was completely smooth sailing after that.  I still continued to struggle from time to time with the feeling of being uncomfortable using my boobs that way, of wanting my body back after 9 months of it belonging to someone else entirely.  I didn’t start zealously loving breastfeeding, the light didn’t start getting all rosy and hazy every time I fed.  But I just knew that there was this deep part of me that needed to do it.  I needed that connection with my child, I needed to nurture her in that way.  Even if I didn’t always like it, some instinct in me needed to do it.
I did learn an important lesson in open mindedness though.  I learnt that there are a huge variety of reasons why a woman may chose not to or not be able to breastfeed, and that all of them are acceptable, and no mother should ever be judged for her choice of how to feed her child.  All women have the right to choose how to use their body and what they are comfortable with.  Some women would dearly love to breastfeed but, for various reasons, are unable to.  Some women simply don’t want to, for reasons of their own, and that is also ok.  I learnt never to judge another’s choices until you have walked a mile in their shoes – or even half a mile, or even just tried their shoes on.
I did come across this very interesting article, The Case Against Breastfeeding.  It is not actually “against” breastfeeding as the title suggests, but rather investigates more closely all the superlative claims made by the pro breastfeeding movement, such as ideas that not breastfeeding will make your child sick, fat and stupid.  Turns out, the much touted benefits of breastfeeding may not be as huge as much of the health literature and many “lactivists” would have you think.  I find it interesting though, that right at the end of the article, the author admits that despite all she found in her research, she herself still breastfeeds.  There is certainly some kind of instinctive aspect to it that no amount of research can remove.
I also came across a wonderful site called Fearless Formula Feeder.  It is a great place of support for women who chose to or have to formula feed for whatever reason.  It think it is fabulous for these women to have a positive, supportive community such as this, as I think mothers who formula feed are subjected to far too much stigmatism in today’s society.  We are all just trying to do the best we can by our babies, and I wish we wouldn’t judge each other so much.  I also think it’s worth checking the site out even if you are a committed breastfeeder – some of the stories may just make you think twice before judging that mum in the parent’s room heating up a bottle for her baby.

Even now, four months on, I wouldn’t say that I *love* breastfeeding.  But I don’t hate it or find it uncomfortable anymore either.  It has grown on me.  I gave myself 6 months as a goal – but now I think I will most likely breastfeed her beyond that.  In fact, I think I might even be sad when I decide to stop.  ‘Cos I gotta be honest, nothing quite beats the way they look at you with those breastfeeding eyes…

… ok, maybe a little part of me loves it.  Just a little bit.